Oops, we did it again!

The man and I took time together again. Our marriage weekend this time had the motto # Fit40up , and that in one of our favorite cities: Hamburg!

It was clear to us that we didn’t want to be lazy this time, not (only) shopping and sightseeing, but fitness and enjoyment above the rooftops of Hamburg. The 4 star superior Radisson Blu Hotel Hamburg invited you to the fitness weekend in the Hanseatic metropolis, and this time I felt a bit queasy beforehand. Not because of the hotel – we were already spoiled by the Radisson Blu in Düsseldorf , where I learned how YouTube invigorates my marriage.

I was a little nervous about the other participants in the fitness weekend. They were all younger than us. Significantly younger! And fitter! But what a over 40 fitness blogger wants to be, must face these challenges – even if not on the first day. With increasing age, women become clever wise, so on the first morning I sent the man to run around the Alster. As you know, I hate running, and nine kilometers is no big deal! I dared to take my inline skates with me to Hamburg, but the running route around the Alster is mostly over sandy paths, that would have ruined my inline skates!

So I used the free morning for a Fit40up beauty sleep in our wonderful hotel room on the 21st floor of the Radisson Blu Hotel Hamburg. Now take a look at this view. That’s crazy, isn’t it? Unfortunately, it was a bit hazy this weekend, but the beauty of Hamburg can be seen even in the fog, both during the day and at night, right? 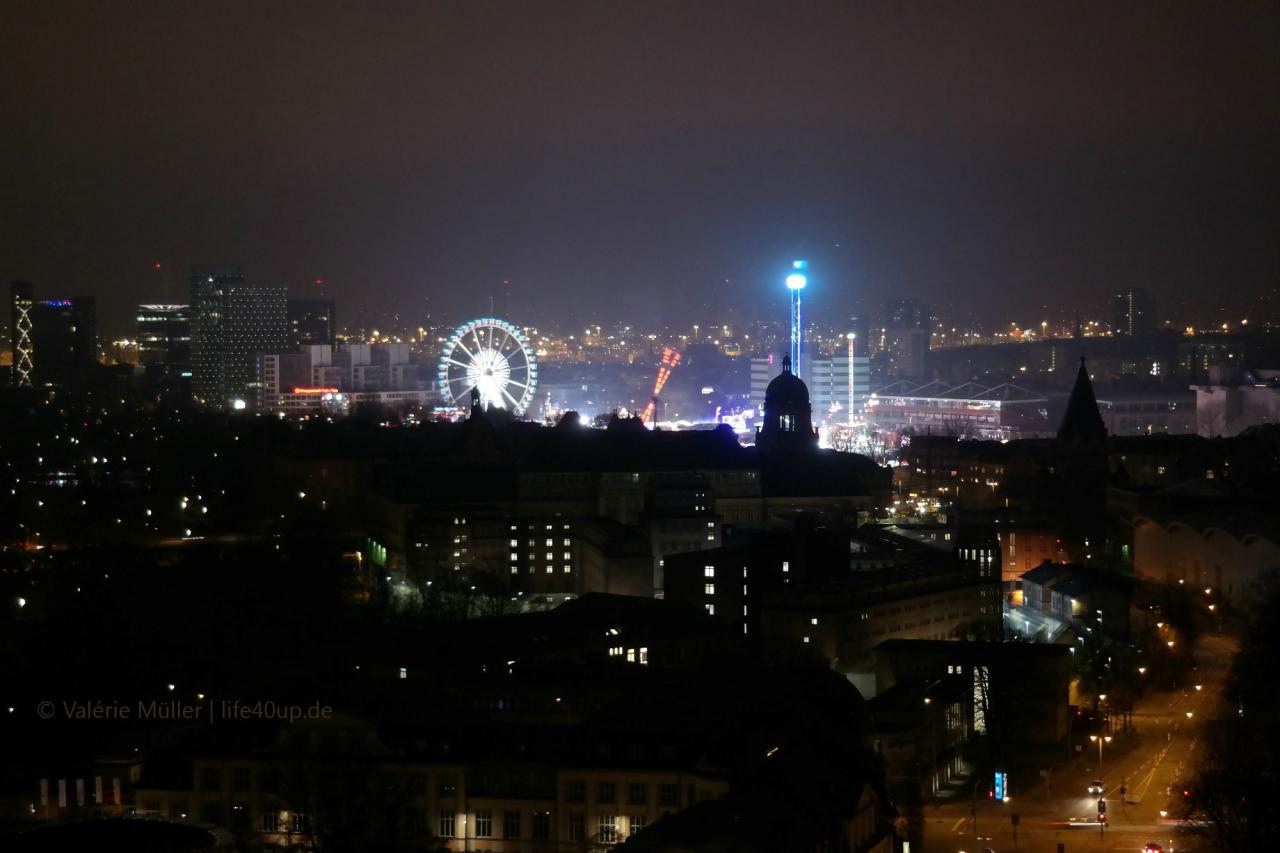 The man and I kept our usual “running routine” on the first fitness morning: He’s running and I cheer him on while drinking coffee from bed via the Runtastic app. So I got back a euphoric and good-humored man, and he got a rested, good-humored woman – win-win for everyone!

But this section is called Fit40up , and that’s why I joined the intrepid runners club the next morning. As? What? I hear you say now. She hates running! Tjahaaa, but the Hotel Radisson Blu has even thought of non-runners like me. For non-runners and Hamburg tourists there is a bike rental on site! The black bikes in retro design are ideally suited for accompanying spouses or other partners to accompany them. 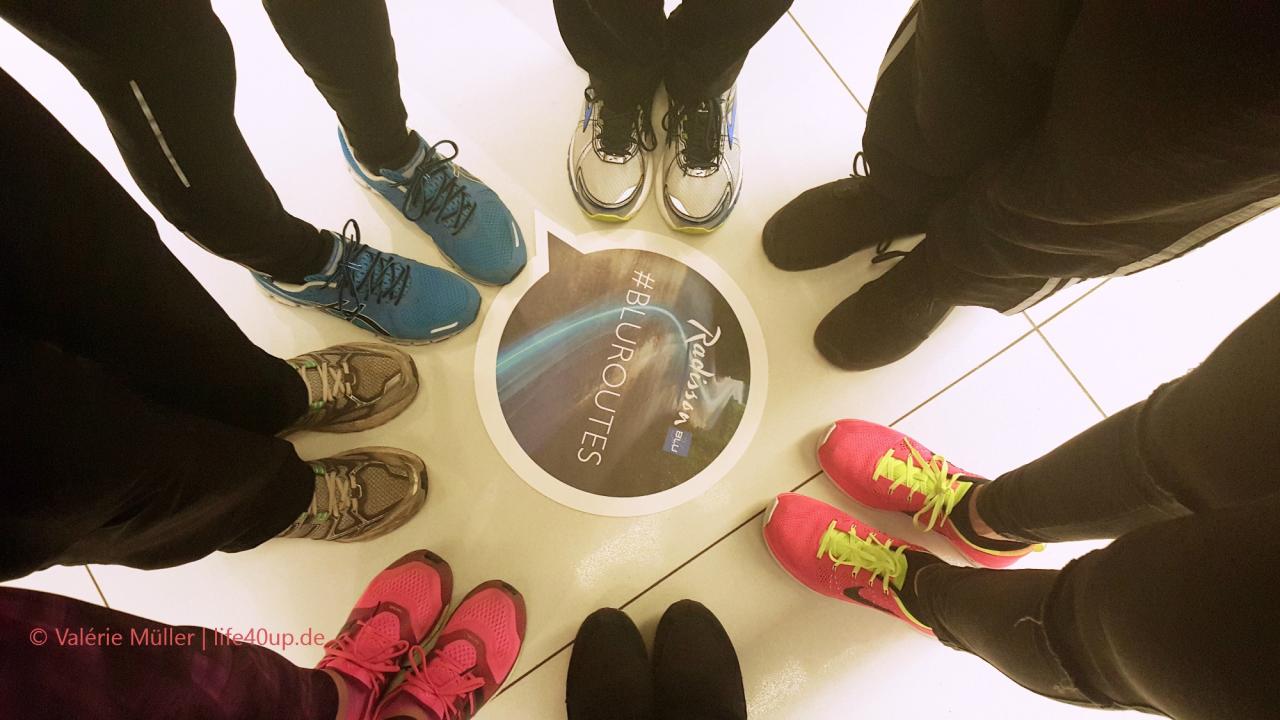 The #BluRoutes are a special service from Radisson Blu Hotels. This refers to safe running (or even walking) routes, as well as cycling routes with start and finish points at the hotel. They have been specially put together by the team members of the hotel for fitness enthusiasts who do not want to miss out on their usual training program while traveling. The best running and cycling routes the region has to offer are presented, regardless of whether they are for beginners or professionals.

Our tour – disgustingly referred to as Route 1 by the hotel – is subsequently given the honorable name of Hollywood Tour , or Radiwood Tou. You will soon understand why.

Hollywood feeling in Hamburg and that while doing sports? Oh yes, you can! I admit I’m a cinematographer. I love films, and #BluRoutes Rute 1 felt like I was on a trip through very different Hollywood classics.

The route starts in the morning at 7.30 a.m. (!) at the Hotel Radisson Blu . Morning mist breathes a moist freshness into our still sleepy eyes and lies in a milky-gray color on colorful functional clothing. As befits Hamburg, the drizzle sets in punctually as soon as we leave the protective canopy of the hotel. Bye-bye hairstyle!

A flock of screeching seagulls is circling above us, as Hitchcock could not have staged more beautifully. This is how actress Tippi Hedren must have felt during the shooting of the film “ The Birds “ . The white “rats of the air” fly dangerously low over our heads, and I regret that I only wear a headband instead of a hat.

We do a little slalom to avoid the threat of danger from above and catch up with the runners again. You have now reached the entrance to the park of the botanical garden Planten un Blomen . Like the Congress Center Hamburg (CCH), it is right around the corner from the Radisson Blu Hotel and is ideal for a short walk in between.

The run continues towards St. Pauli to the Hamburg DOM 2016. The DOM is the largest folk festival in the north and takes place three times a year: There is the Spring Cathedral (mid-March to mid-April), the Summer Cathedral (late July to late August) and the Winter Cathedral (early November to early December). Over 260 showmen and over 110 restaurants are located at each cathedral on the approximately 160,000 m² festival area.

While crowds of people slide over the DOM after dark, surrounded by thousands of flashing lights, resounding music and deafening announcements by the showmen, the cathedral is deserted in the early morning. The rides are quiet, the aisles are deserted and colorful flags are quietly blowing in the wind at the booths.

The scenery reminds me a lot of the film Westworld – people of my generation may still remember. Between all the silent backdrops, I almost expect a bald Yul Brynner to turn the corner as a running amok and chase the runners. And if I’m not entirely mistaken, then the hairy King Kong in front of the ghost train has stretched his hairy arms towards the runners. Count them briefly – no, everyone is still there!

The last stage leads straight over the most sinful mile in Hamburg – the Reeperbahn . While the slightly dingy Las Vegas feeling arises here after dark, the Reeperbahn in the early morning is fascinatingly sobering in a terrifying way. As soon as the colorful lights have gone out, the brutal reality jumps in the face of the jogger: The creatures of the night, still partying loudly a few hours ago, now sway pale and gray-faced over the littered sidewalks, the beer bottle tightly clutched.

The Walking Dead in the middle of Hamburg. Cycling is developing into a circus act: while I hold my smartphone in one hand in order to adequately capture the runners and scenery for posterity, I ride slalom between zombie-like figures, broken bottles, garbage trucks and lampposts. In between, the own fascination of horror over so much brutal, ailing reality in such a beautiful, otherwise rather classy city.

The tour leads back towards Planten and Blomen, where you can see the Radisson Blu Hotel in the distance. Another short final spurt, and we are back at the starting point of the tour, freshly fogged and with red cheeks and clammy hands. Now quickly under the wonderfully warm rainforest shower in the hotel room and then on to the excellent breakfast buffet.

I was already raving about the breakfast buffet in the Radisson Blu Hotels after our wedding weekend at the Radisson Blu Düsseldorf . And what can I say: It’s just as wonderful at the Radisson Blu in Hamburg. Above all, there was my beloved goat cream cheese with fig mustard. The stuff is so outrageously delicious, I can hardly control myself and discreetly hide the amounts that were on my plate.

But protein is known to be very important for athletes … Speaking of athletes: The younger participants of the fitness weekend were all delightful, adapted to the general running pace and puffed after the run just like us older ones.

On Fit40up Wednesday you will find out what my other fitness program was like this weekend at the Hotel Radisson Blu Hamburg , and how I suddenly ended up in a football stadium, although I never wanted to. So stay tuned!

Many thanks to pureGLAM.tv for the invitation to Hamburg, as well as to the Radisson Blu Hamburg for their hospitality, the fitness program and the excellent food!